That was my question when the opportunity of creating a market garden at Homewood landed at my feet.

There was definitely no question about whether I was up for the challenge though. After spending much of 2020 without work, scraping by with temporary jobs sorting parcels and recycling plastic, I was desperate for a project I could immerse myself in.

This wasn’t always the case, I’ve been a very proud professional chef for the last 18 years (half my life now) and was as ill prepared as anyone when last March, the hurricane that is Covid-19 tore through so many industries including mine; hospitality.

Being a chef was always more than just a job; it was all consuming, just ask my long suffering girlfriend. My mind would rarely wonder far from kitchen affairs, days off would be spent menu writing, reading up on the latest cook book… or desperately trying to find a new KP after another ‘no show’ the night before.

When it all came to a sudden halt, I was lost.

Like many people the first lockdown brought time for reflection, time to focus on the people closest to me… and time to practise the perfect sourdough. But also, most significantly for this blog, it took me out into the garden.

I am now very thankful to the previous occupants of our property for letting the garden get completely overgrown. I spent a very happy few months clearing, pruning, laying grass and growing veg in the fine weather we had last spring.

It’s a long garden, nearly 50m but relatively narrow with a pond, fruit trees, lawn, beds, patio and pergola. There was so much to do each week, that it was physically hard work and tiring. As I got stuck in, I began to feel the familiar buzz I’d been missing from working in a professional kitchen.

I started to become fascinated with the growing world. The time I’d normally have spent behind a stove was instead spent walking Muffy (our Miniature Schnauzer). I’d note the stages of the lifecycle of plants and shrubs, ponder the incredible architecture of the common teasle or the elegant flowers on sprawling brambles - things I’d never noticed before. I loved being outside and watching Gardeners World would give me a warm fuzzy feeling.

It dawned on me that if I wasn’t allowed to cook, maybe I should become a professional gardener. I still can’t believe how seamlessly I got from there to where I am now.

An RHS course raised my knowledge and focused my goals. A visit to Homewood, where I had previously spent a number of years working as a sous chef, turned into four busy months cooking on their new terrace and a chance conversation with the owner about his vision for a market garden in the hotel grounds. That fortuitous meeting, more discussions and some meticulous planning and research on my part, and I was offered the job as gardener with the task of implementing and overseeing the entire market garden project. I couldn’t have been happier.

As part of the RHS course, we studied ‘outdoor food production’, so I had some knowledge when it came to planning beds and the idea of a ‘no dig’ (no till) garden fascinated me.

It’s not a complex, new or fashionable method, it’s actually the opposite;

the idea is to not disturb your existing soil structure, ‘no dig’ means exactly that, no dig. Weeds and grasses are killed off by covering them with a mulch, which can be anything that excludes light, for me it would be layer of natural cardboard then compost 10-15cm deep. We then simply plant on top, organisms in the soil eat away at the cardboard and blur the line of compost and original soil. 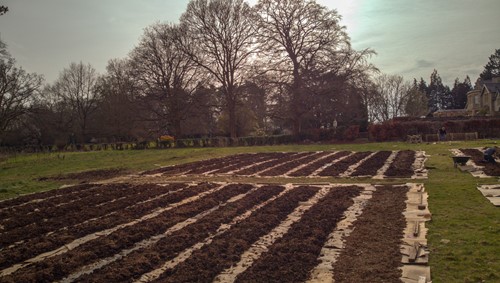 Local garden hero Charles Dowding has championed this method, but I had no first-hand experience in it, nor did I know if it would work on such a scale.

For starters…where was I going to find enough cardboard to cover 900m2?

Maybe traditional methods of digging up the land would be a safer bet considering this was my first big project. The ‘no dig’ method was a no brainer in the end. I felt passionately that the land should be worked responsibly, using organic methods wherever possible and improving the landscape that was already there. Bringing in machinery to dig up the place didn’t seem to fit with the ethos of the whole garden project.

So after weeks of scavenging cardboard and braving the elements of February, I managed to turn a field into what hopefully will be a very productive growing space. Now I just have to worry about the next small task of actually growing crops in it.

See you next month,