I don’t want to start every blog talking about the weather, but growing vegetables is completely dependent on whatever climate we happen to receive each month. May was incredibly wet and another cold month. The rain was very welcome and growth on my potatoes, peas, spinach and chard was steady. May is also generally a month of transition from old crops to new, but without overwintered crops, I still have little harvest to show. I started to get worried (with the longest day just around the corner) that the garden would not make it into top gear, until finally June decided to bless us with some higher temperatures. It feels like the end of winter and finally the start of summer, with spring barely making an appearance! Understanding how to react to these unpredictable changes is what makes a more successful grower.

April and May were a great learning curve for me and it really makes me look forward to next year when I can tackle these challenges with a more experienced mind. I have probably had as many failures as successes so far if I’m honest. A whole bed of spinach ‘Medania’ decided to bolt skywards and go to seed before I even made a single picking from it. Another variety ‘Amazon’ is cropping just fine however. Transplanted parsley has stunted growth and yellowing leaves. These could both be down to the manure in the beds not being as well-rotted as promised but I can’t be too sure. It would be easy to get bogged down with these small issues, but as our fearless GM says, “taking a long-term vision on projects like these is absolutely key”.

There’s less to sow this month with only runner, French and dwarf beans going into modules just last week - much later than I had planned as I waited for the weather to change. Courgette and squash seedlings sown early May are looking strong, but I am still in no rush to transplant them to their final positions.

The warmer weather brings on lush growth all around and that’s no exception for nasty perennial weeds that are making themselves known in numbers on certain beds. Couch grass is tenacious but easy to lift out with a trowel as the no-dig beds have fairly loose soil; I try to get as much of its rhizome out as possible with it. Bindweed is trickier, its more delicate, deeper growing roots store more food and are hard to lift out in one piece. I will continue to mulch rather than attempt to dig and hope it weakens and gives up over time. 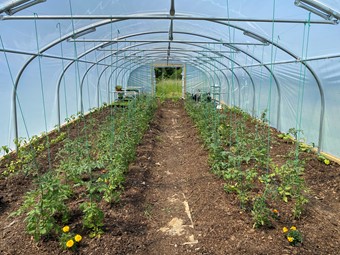 The biggest trial this month and hopefully for the rest of the year has been constructing our new 15-metre long polytunnel. I totally underestimated the scale of the task and initially thought it may be a two-day build, something slightly more involved than a large tent. I was very wrong! The foundation plates alone took me four days of digging, yes digging was very much unavoidable here. The rain and heavy clay made for some unpleasant days as I had to break through sandstone bedrock to get the hoops in straight. The structure itself was a slow process of working through 4 very large boxes of clamps, clips and nails along with all the steel tubing and wooden planks. I studied the instruction manual religiously, often falling asleep reading it in bed at home to avoid any building errors. I could most definitely not risk it being blown away down the valley into Freshford! As I write this the polythene cover has been attached and is awaiting a few finishing touches, I had pre-prepared the beds in April using the no-dig approach with a mulch of cardboard and then mushroom compost directly on the surface and now I can finally start the fun part of filling it up with all the lovely tomatoes, chillies, basil, cucumber, aubergine and melon plants grown from seed that I’ve been caring for in pots since March.

The writer Rudyard Kipling wrote some precious lines I can relate to, I'm not sure he was building a polytunnel at the time though; “Our England is a garden, and such gardens are not made by singing ‘oh how wonderful’ and sitting in the shade.”

My new recipe is up - Turnip and Gruyere gratin