April was one of the busiest months I have spent in the garden so far. With a flurry of fresh leaves and delicate blossoms, the year is gaining momentum and I feel I’m sprinting to the invisible finish line of the second week of May where the risk of frost will have past and the garden is reborn.

It feels a bit like spinning plates with all the different things going on in each bed and April and May are the weediest months of the year after winter has broken the dormancy of many seeds. There are now a lot of young plants in the ground, but nothing is certain, these plants are most at risk and my job is to create an environment where they can thrive without struggle.

Harvests are getting a little slim now as we reach the hungry gap. Most overwinter crops are cleared, apart from spinach which I have more than we can use. Whilst this year's sowings are yet to deliver, apart from radish of which I am on my third sowing. 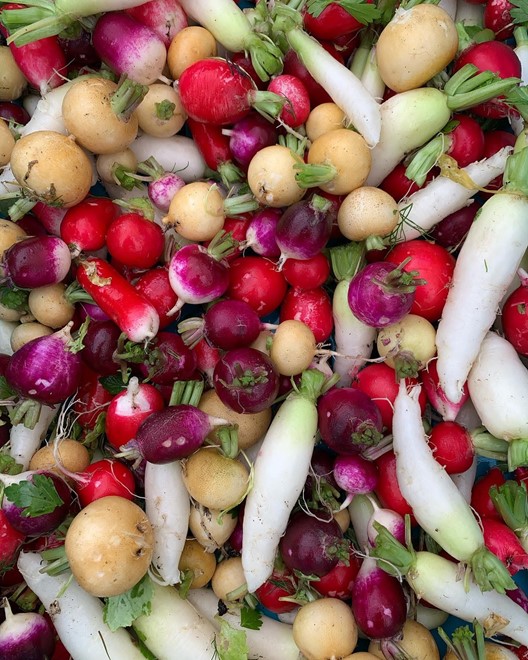 There is plenty to sow now - beetroot, sprouts, carrots, French beans, leeks, lettuce, parsley, peas, radishes and frost tender flowers to attract pollinators. Beds of kohlrabi, fennel and a few varieties of spring onions are new to the garden, sown in March and now settling in nicely. I didn’t attempt these last year at Homewood so have much anticipation to see how they get on. I have covered the kohlrabi in ultra-fine netting to protect them from flea beetle that are prevalent on our hilltop garden. The tiny, shiny jumping black beetle loves to puncture holes in brassica leaves and will be around soon. All brassicas will need netting to protect them from white butterflies very soon too.

Another new addition to the garden on the sloping fields is a flock of sheep with their young, donated briefly by a local farmer to feast on our lush grass. The bleating beasties add a lovely new soundtrack to the garden…and are kept a safe distance from my patch. However, another animal is causing me great stress. Rodents. I say rodents as I’m still not entirely sure what is doing the damage. These little critters are running around the polytunnel at night and pulling up and eating all my freshly sown seeds and rummaging through trays of seedlings, causing complete devastation to my sowing schedule, wasting time and seed. If I had hair I’d be pulling it out! Every step I take to stop them, they come back twofold to the point where I entered the tunnel one morning to find they had just eaten through several covered trays to get to the seed. There's no place that’s safe from them. The critters also ate through mesh cages I built as protection. My last-ditch attempt to solve the issue is to remove the seed. Their favourite by far is coriander, which I have had no joy in propagating into micro cress at all, it also has the strongest smell. This is now growing safe at home, but I’m sure this will be an ongoing problem and it may be a while before I can walk into the polytunnel without fearing what damage I'll see. 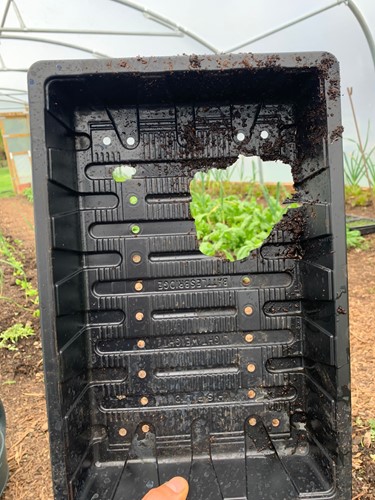 Our asparagus, grown from crowns, are in their second year now. They should be good to harvest in their third, but I don’t think it’ll be a big harvest even then. They really are a crop for the patient. I have pinched the odd spear of course, to check on their development and they are wonderful.

Here's a really interesting fact I found out from Radio 4’s GQT this week, the loose heads of dark green leaves known as spring greens are actually overwintered pointed spring cabbages that have failed to form a solid heart, basically failed cabbages. This gave me one of those ‘of course’ moments and also brought me great joy as quite a few of my overwinter cabbages have done just that, most likely because of heavy slug damage over the warm December we had. I thought they may be destined for the compost, but now I have spring cabbages and spring greens from the same sowing!

A big part of the garden which I don’t mention much is our miniature schnauzer Muffy who lives for chasing and terminating rodents. Unfortunately, she’s not great at getting them out of their hiding places. Another talent is stealing the show from the garden. The marketing team came down to take a look around and talk no-dig but ended up giving all attention to Muffy, I don't think they heard a word I said. She is a fantastic gardening partner though and fully deserves the attention. If you do come down to the garden, you’ll find her perched on the compost bays where there’s a bit of warmth from underneath. 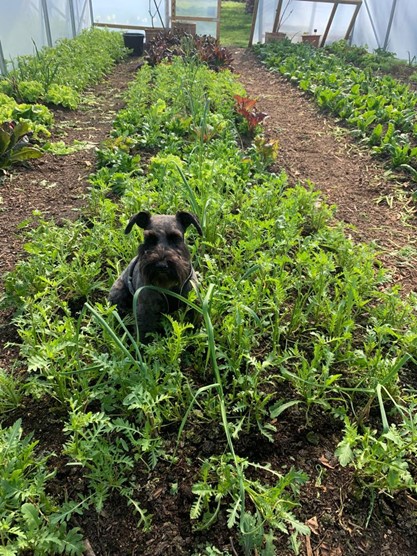