The garden is well and truly buzzing with life and there is everything to do this time of year, my head is spinning trying to stay on top of it all! Each day brings a veritable host of new tasks I would like to achieve of which only a fraction I will be able to complete. The temperature has cooled and has been wet for the last week as I write, but it was hot and sweaty for most of July, a real contrast to August. Keeping everything alive and productive in the polytunnel is a lot of work and is not made any easier on the hottest days where temperatures reach a very humid 35c. The 5-metre-long hedge of basil running up one side loves the temperature and is positively shimmering, while I’m a poor reflection next to it cutting it back wilting away by the second. 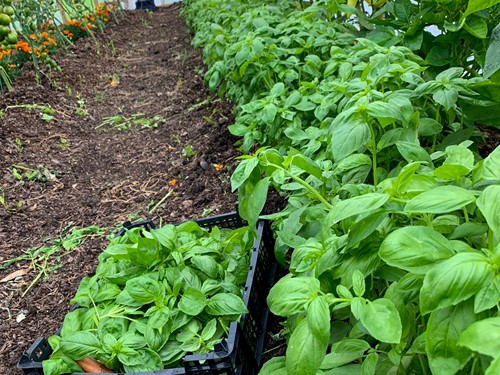 There have been points at the end of the day where I find myself wishing for winter when the growth slows and I can get back on top of everything. There were of course great moments that I have been waiting for, one of them being picking the first heirloom tomato in the polytunnel, after what felt like an age waiting for them to ripen. ‘White queen’ being my favourite, with a creamy off-white colour and a truly fresh taste. I am now picking over 10kg a week. It would be more but some have suffered blossom end rot, a watery brown patch at the base of the fruit, a nutrient deficiency. Which is strange because it's the first year of no-dig, so they are growing straight into a rich mushroom compost. I’ve upped the watering routine along with a heavy mulch of more compost, hopefully that will make them happier and they run through until October. Using as many heirloom seeds as I can is an important aspect to me when planning the garden. I have slowly come to realise that most modern varieties have been bred for the needs of large-scale chemical farming, where all aspects of the environment are controlled with fertilisers, herbicides, insecticides and fungicides. After all, supermarkets demand shiny fruit that are tough to survive shipping and display and so these are what are being bred. But these commercial varieties give poor results when grown on a smaller scale without all their chemicals. 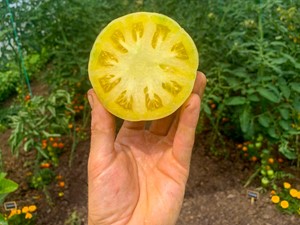 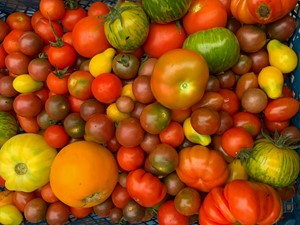 As a former chef, I want to farm for flavour. In the kitchen, the quality of your dishes was always limited to the quality of your ingredients. So when growing, if the seed doesn't have great flavour genetics, then I’m already a step behind. It’s bizarre but it’s incredibly hard to find seeds bred for their flavour above yield or form. Some companies like Row 7 Seeds are championing this and more heirloom varieties are becoming available passed down from smaller-scale farmers and gardeners through companies like Real Seeds. I look forward to tracking these seeds down and saving my own.

Harvest - clear - replant has been the name of the game in the outside space, new potatoes and spring cabbage have now finished and it’s a quick change around for veggies with more of an autumnal vibe, transplants of young celeriac, leeks, cavolo nero and kale are finally all in and looking good. I can’t say the same for my Brussel sprout plants that have been stripped by caterpillars. The cabbage white butterfly must have sneaked through a gap in the netting. So no sprouts from me this Christmas, it's annoying but not the first or last time I’ll lose a crop to pests. The deer have been back a few times for a little snack, they enjoy strawberry leaves bizarrely. 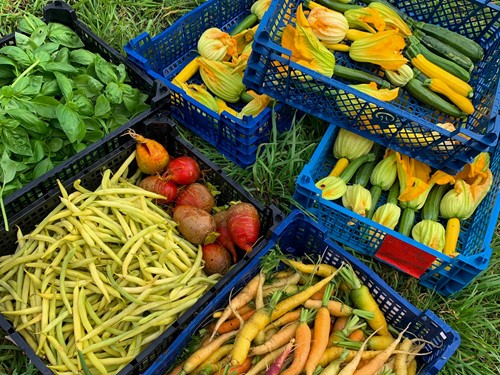 As the temperature and daylight hours slowly decrease, we move past the flowering time for plants like spinach, salad rocket, coriander and chervil, which I completely failed at growing earlier in the year as they all bolted on me incredibly quickly after struggling with the exceptionally cold spring. So, August brings a kind of second spring and a second chance and will hopefully give harvests through autumn and into spring. A nice problem I have now is that I am harvesting some crops in substantial amounts and in short periods and as busy as Homewood is, the kitchen can’t get through all the courgettes, basil, cucumbers and potatoes that I can pick! So, when I got the message the kitchen at our sister hotel, The Bird, Bath, was a little short-staffed, I was happy to offer my chef services with the opportunity to take along some produce too. I took some baby carrots pulled that morning and we served them that evening. It was so satisfying as it’s the first time I had been involved in every stage of the carrots life from sowing, growing, weeding, watering, protecting, pulling, washing, prepping, cooking to finally watching it leave the pass alongside some perfectly cooked duck breast to some lucky guests. It is great to see produce spreading across the business. We are also providing fresh herbs and flowers for local catering companies, it’s good to see our kitchen garden growing in more ways than one.

My new recipe is up - Ratatouille Tart