Summer unfolds and I am now in the thick of it! Gone are the days of watching the potato beds slowly fill with greenery, looking out for the first unripe strawberry or willing on my tomato seedlings. Everything is growing fast (including weeds). The first wave of planting has produced its harvests and I am now pulling, picking and cutting produce from all over the kitchen garden in what has been first-rate growing weather.

But before I go on about the weather and seed sowing, I would like to say how humbled I was by the guest feedback from our inaugural no-dig pop-up dinner. To be able to write a menu around the produce from the kitchen garden and then host and cook it for 16 lovely guests was a privilege and I enjoyed it as much as everyone else. I think I did the kitchen garden justice from BBQ kohlrabi in beetroot leaf to carrot ‘veg pastilles'. Roll on the next one in August! 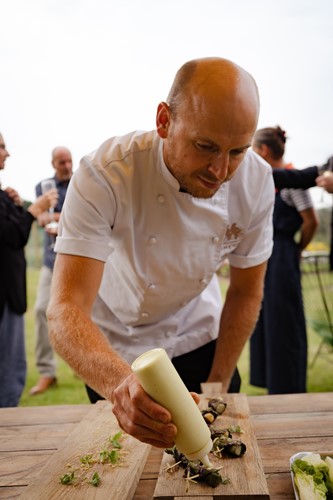 I feel like I’ve said this before, but now feels like the busiest time of year, especially when the new potatoes need harvesting, washing and storing, all done by hand of course. The harvest of the first early potatoes “rocket” was fantastic. Over 150kg from three ten-metre beds. There was a fair bit of unavoidable digging and scraping around to get as many as I could. The beds were left very parched and loose but after a lot of watering I managed to get them turned around within the week, they now host young Brussel sprout and runner bean plants that were waiting in the wings like substitutes in a football match. 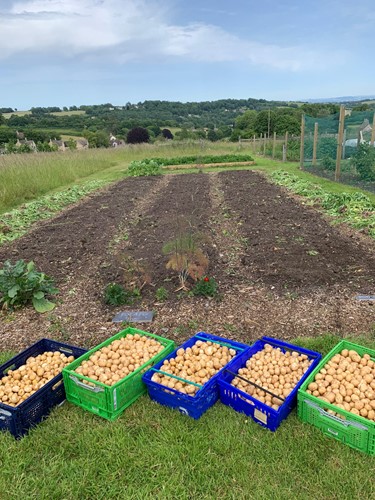 The quick succession of the second wave of planting, which mainly consists of beans, leeks and brassicas, is imperative for this garden if it's to be as productive as possible.

I learnt this lesson last year after being stuck with empty beds for long periods. This time I have plants ready to go in the ground as soon as another crop has finished. It's not a finely worked out plan, I have just sown (in modules) more than I could ever possibly fit into the garden. Days are now at their longest, giving plants almost 18 hours to photosynthesise and grow. We must not waste any of those lovely rays of sunshine..

The first carrot harvest was unsurprisingly disappointing. Consistent germination and nice straight roots evaded me once again. The variety “Red Samurai” proving the hardest to grow. “Purple haze” and “Yellowstone” carrots fairing slightly better. Sugar snaps “Delikett” grew very blissfully and produced a considerable amount of super sweet pods. I picked them at their plumpest and ate a lot of them while doing so. They are nicer raw than cooked. I also pulled my first ever harvest of garlic, sown last autumn. Many of them had rust on the leaves but it hasn’t affected the bulbs. They can be used fresh or left to dry for later in the year. 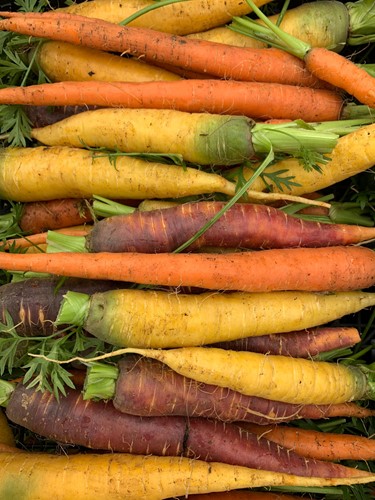 There is still time to sow beetroot and carrots and the many different types of kales that are available now, check out realseeds.com for heirloom inspiration.

The beds are now needing a generous watering after the surge of growth in spring. I do most of it by hand for economy, and at any time of day based on when I have time. I have no issue with watering in bright sunlight, which is often the case as I’m busy with other jobs in the morning time and late afternoon. When I do water outside I try to water well, in addition to quenching a plants thirst, it encourages it to send its roots down deep into the soil so that it can sustain itself and reduce the watering burden later on in the summer. Plants that concentrate their roots in the surface layer of the soil may dry out quickly and need constant watering. Modules and micro cress trays often need watering twice daily when the sun is out.

I try to keep the kitchen garden as tidy as possible but it's tough as it is a productive working area. I spent many hours manicuring it last month as we started the no-dig dinner there with drinks and BBQ canapés. Keeping a tidy edge along the borders makes a substantial difference to how it looks and is one of the most satisfying jobs in the garden when done correctly. Honestly, I can hardly bear it when they get overgrown. The bar is set high in the main area of the gardens by head gardener, Steve, whose lawn care and borders are second to none. Steve's edges are always looking super sharp and his high standard is something I aspire to in my area of the grounds. It's no competition but it's good to have someone raising the bar.

My new recipe is up - ROASTED BEETS, CARROTS, SEEDS, HONEY AND FETA